83b. Achieve Inbox Zero at work

I changed jobs but not organizations and cleaned my inbox down to zilch in the process. Go me!

92b. Post a picture of me holding Hook in August of each year

I actually took this photo on the last day of August last year and then proceeded to never upload it. Of course. 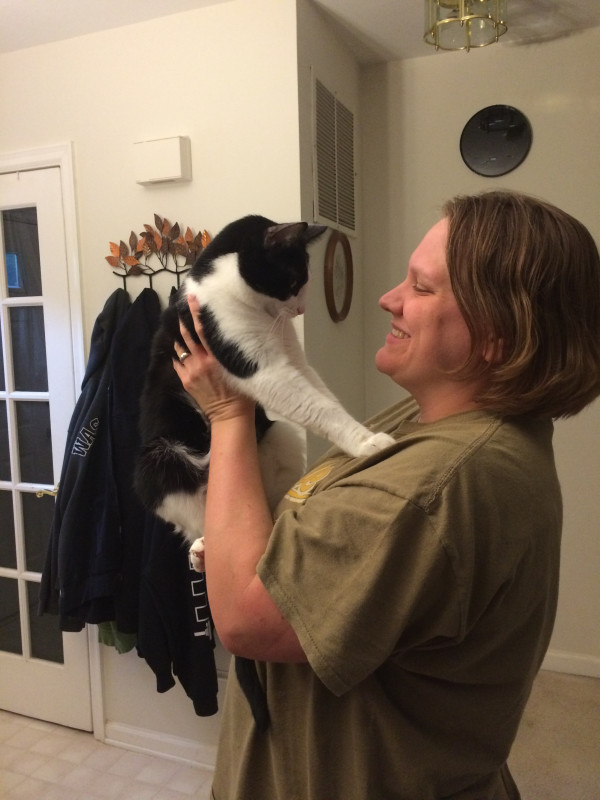 06b. Get engagement ring fixed

I stopped wearing this well over a year ago because I'd started worrying it might fall apart. One of the posts was sheared off and two gems were loose, plus there was a scratch in the main stone. But they did a fantastic job fixing it, and it's lovely again. :)

Ben Lomond was a lot more interesting than I'd expected because it had been a field hospital during the Civil War and is dressed up like that now, complete with sounds and scents. Definitely worth visiting, but be prepared. That gangrene smell is something else.

I got a new job at the beginning of April, and a month later I rolled my 401K accounts from two previous jobs into the current one, so I'm all set. For now. Heh.

70b. Attend a local festival or fair

When I first picked out this Thing, the idea was that I'd attend a local festival that I hadn't attended before. However, I didn't specify, so I decided to count Centreville Day 2017. I hadn't been to one since 2011, and was a bit disappointed to discover that the festival had changed not one whit. Whomp whomp.

76b. Start a hyperlocal tourism journal and make five entries

My original idea for this journal was more text-based, with restaurant reviews and stuff like that, but ultimately decided it should be a sketchbook. It's still a work in progress, with some sketches of various landmarks and plans to gluebook over the pages ruined by false starts (of which there have been several). I think it'll end up being something I can be proud of, though its deadline is surprisingly the same as the end of these 1001 days, as I'm closing on a house in Rockville, Maryland, at the end of June. Goodbye, Centreville! Hopefully I'll get all my drawings done before I leave. I think I will. There actually isn't a whole lot here interesting enough to draw.

47b. Read one of Ixy's favorite books

Going Postal by Terry Pratchett: Moist von Lipwig, fresh off the scaffolds, is offered a job in lieu of a death sentence for his many swindles: become postmaster. This is no small task: unsent letters have been piling up in the post office for decades, and everyone stopped mailing letters when the "clacks" - a sort of visual telegraph - came to be. With the help of a memorable cast of characters, Moist takes it upon himself to save the post office and return it to its former glory, even if he has to return to his old con-artist ways to do it. The whole thing is very fun and very funny, and you don't even have to be familiar with Discworld to enjoy it. (I read the first Discworld book over a decade ago so I was basically coming into it cold.) Definitely recommended.

48b. Read one of Kate's favorite books

Fangirl by Rainbow Rowell: Cath is a prolific author of Simon Snow fanfic (Simon Snow being the protagonist of the fictional Totally Not Harry Potter series by Gemma T. Leslie) and starting her first year of college. She is, quite simply, completely outside her comfort zone. Her twin sister Wren has decided to try living apart for the first time ever, so Cath is rooming with a stranger named Reagan and, for all intents and purposes, Reagan's maybe-boyfriend Levi. She is taking an upperclass-level writing course taught by an actual novelist, and befriends Nick, who starts as her partner in an assignment and becomes a regular cowriter. Cath is kind of a pile of neuroses to begin with, so all this change on top of the regular family drama she's already dealing with makes her life pretty difficult. But I gotta say, this was a delight to read. I was transported back to college in so many ways, both in general (dorm life, walking everywhere) and more specific (creative writing classes, the dark recesses of the library at night, attending a Harry Potter book launch party). I've never been a big fanfic writer, but there was once a time when writing was almost like breathing, the way it is for Cath. Most importantly, I loved all the characters. I've encountered versions of them in real life many times, and perhaps because of that I felt a deep affection for all of them, even the terrible ones (but in different ways).

Interspersed in the book are selections from Simon Snow - either the original books, fanfic written by Cath and Wren in high school, or from Cath's current work in progress, "Carry On Simon". The similarities to Harry Potter are intentional, of course, but there's enough difference for the passages to be interesting. Cath is a huge fan of Simon Snow - all her posters and t-shirts and most of her other stuff is somehow related - and yet her fandom is never treated like a joke. The reader is never meant to look down on her for it. It's a refreshing change, really. Cath isn't one of those fans who won't hear a word against her beloved characters; as a fanfic author, she loves writing endless "what if" stories, exploring how the world would be if Gemma T. Leslie had made different choices. This novel is, in some ways, a love letter to fandom in general.

In short (ha!), I really, really enjoyed this book. Some of it was nostalgia, I'm sure, but mostly I just liked the characters and their interactions and I wanted to hear more about their lives. I'd love for there to be a sequel about Cath's sophomore year, and one of these days I do plan on picking up Carry On. (Yes, Rowell wrote a full-length version of the Simon Snow book Cath is writing throughout Fangirl.) I don't really consider myself to be a fangirl in general, but I am a fan of Fangirl.

50b. Read one of Six's favorite books

Rifles for Watie by Harold Keith: Jeff joins the Union Army in Kansas and fights in the Civil War for a few years. Stuff happens, of course, but that's the gist of it. This book took me forever to read. Not because it's long - it isn't, especially - but because it just didn't really hold my interest. I think I've just read too much about The Civil War. I did like reading about the Native American involvement, which is something that doesn't come up much in a lot of the narratives. But I already knew a lot about camp life and battles from that era, and I was not comfortable with the slave characters, who all seemed to love their masters so much. That said, if you want to read and otherwise fairly realistic depiction of the Civil War out in the western territories, this is a decent read. Just be sure to read other stuff to give it the proper context.
Collapse